With 2016 rapidly coming to an end, I figured it would be nice to take a look back at my year of model-making in my first ever end-of-year retrospective.

All in all, my modeling output was down this year compared to the last. I completed eleven models this year compared to my over twenty models last year. (To be fair, most of the models I completed in 2015 were smaller wargaming models.) What I lacked in numbers, I made up for in size and complexity, including the absolutely massive Super Star Destroyer in completed! I feel that I really grew as a modeler this year and I've expanded my range of techniques to some things I've never tried before.

If it wasn't already obvious, 2016 was dominated by Bandai Star Wars models, but this barely cracks the surface of my Bandai stash:
In 2017, I'd like to start working my way through these models. Specifically, I'd like to tackle Bandai's 1/144 scale Millennium Falcon and Slave I; they both would look great on display next to one another. I'd also like to finish Kylo Ren and paint the Darth Vader I put together over two years ago (!) because they too would look great on display together. That being said, I think my first personal project of the New Year is going to be my Skyhook Models Planet Express Ship that I bought over two years ago. It's been sitting in my stash for some time and since Futurama is one of my favorite shows, I'd really like to get some paint on it. Another item high on my list, albeit one that is quite a departure from my comfort zone, is the awesome full-size Tom Servo puppet kit I acquired over the summer. I have no idea where I'm actually going put this handsome fellow, but I'll figure something out. I also have a couple of commissions to finish up next month, including some Star Wars Armada ships, a Mansions of Madness miniatures set, and a Bandai A-wing. Once those are done, I probably won't take any more commissions for a while so I can begin to chip away at my mountain of model kits.

As I will be out of the country all next week, this will most likely be my last post of the year, so I would like to extend my warmest wishes to everyone. Wherever you are, have a  Merry Christmas and Happy New Year!
Posted by TJ Haller at 11:20 PM No comments:

The model is done for the most part, but I might add a couple more touches of weathering before I consider it complete. The base is painted and awaiting a pin wash, after which I'll add a little bit of weathering to it. This has been a nice, quick build to lead me into my Christmas vacation next week and I can't wait to complete more models next year!
Posted by TJ Haller at 11:27 PM No comments:

I had a little bit of spare time so I decided to throw together this Bandai 1/72 TIE Interceptor. Being a fan of the X-Wing Miniatures tabletop game, I decided to paint it as a member of the 181st Imperial Fighter Wing, specifically Soontir Fel's fighter. In the tabletop game, Fel has a reputation of being one of the best pilots the Empire can field and this is based on his storied history of fighting the Rebel Alliance (and later the New Republic) in the various Rogue Squadron novels.

The model was primed black and then given a coat of Alclad Aluminium (ALC-101). I sponged some Vallejo Liquid Mask on areas where chipping would most likely appear (hatches, leading edges, etc.) and then applied some light preshading with Tamiya Rubber Black (XF-85). I mixed a nice blue-grey Tamiya Neutral Grey (XF-53), Flat White (XF-2), and Medium Blue (XF-18) at about 70% Neutral Grey to 30% Flat White with a couple of drops of Medium Blue added. (Truth be told, I probably couldn't recreate this color if I tried!) The panels on the wings were primed black and painted with a 5:1 mix of Vallejo Game Air Black (72.751) and Vallejo Model Air Arctic Blue (71.071), which is a metallic blue to give the panels a bit of a bluish tint and a nice iridescent shimmer. The telltale marking of the 181st, the "bloodstripe," was masked off with Tamiya tape and painted with Tamiya Flat Red (XF-7) with some liquid mask applied with a piece of torn foam for the chipping. Various panels and greeblies on the ship were painted with a dark grey I mixed using Tamiya Neutral Grey and Rubber Black.

All that is left to do is an enamel pin wash to bring out the details and a little more weathering, using mainly oils and enamels.
Posted by TJ Haller at 11:30 PM 3 comments: 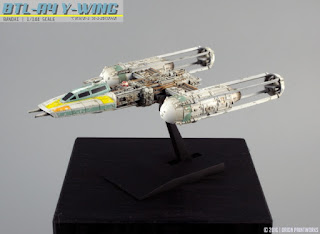 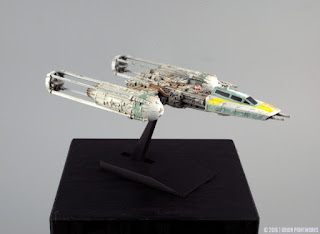 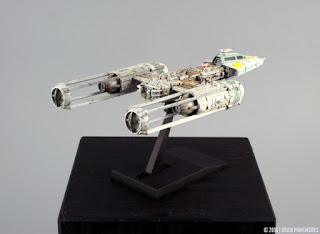 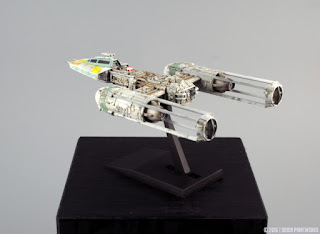 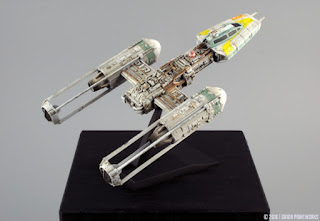 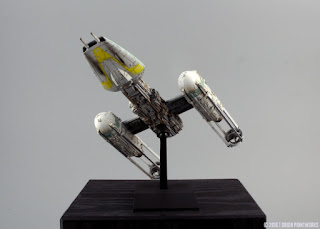 I needed to cleanse my modeling palete so I used this afternoon to put this Bandai "Vehicle Model" (1/144 scale) together while my hometown Washington Redskins beat the Philadelphia Eagles. It's was a fun little project and the detail on is incredible! I painted it as Dex Tiree's Gold 2 who was famously shot down by Darth Vader during the Battle of Yavin. I still need to add some washes and weathering before I call it done, but I'm really enjoying working on this neat little model!
Posted by TJ Haller at 11:20 PM No comments: 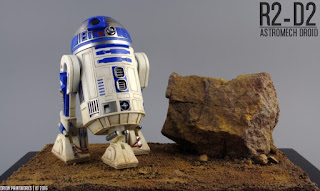 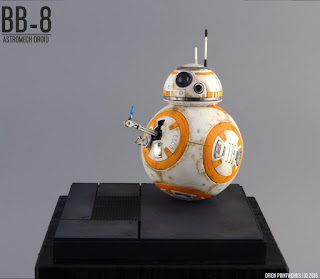 This model will to the same client as the R2-D2 I've been working on. The base is thick pieces of plasticard cut into "plates" and painted to resemble the floor of the Millennium Falcon. I added the red area under the photo etch grating for a little splash of color.
Posted by TJ Haller at 10:57 AM No comments: