Here it is, the completed Iron Warriors Terminator Lord. Side note, I trimmed the tree down because I was told that it looked too big so these pictures don't reflect how it currently looks. Enjoy! 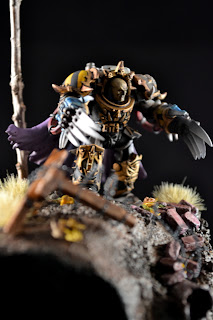 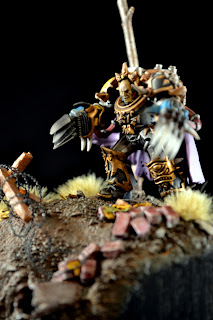 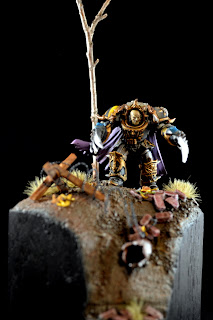 So my first painting contest is over. I took home the trophy for Best Vehicle/Monster (I'd also like to admit that it was the only entry in that category...), which was nice. My Grey Knights didn't win, which is okay. I know I made some rookie errors in the painting but everyone seemed impressed by it, especially considering I've only been in the hobby for 6 months. The NOVA Open is this weekend and I was encouraged by some people to enter some of my work, but I don't feel I am there yet. I hope to have the confidence next year to enter some things. We'll see...

I do have a new project I am working on, aside from still working on a small Raptors force (and of course there are my Ultramarines...). Allow me to present my Chaos Terminator Lord! 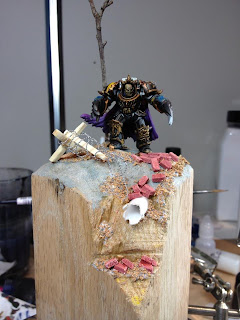 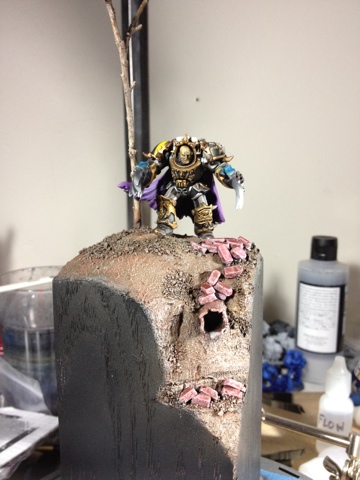 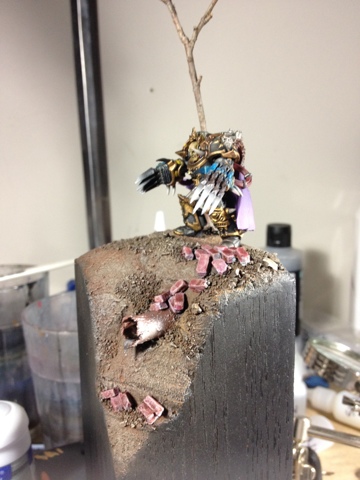 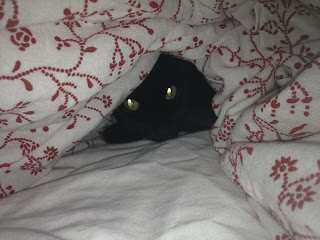 That is a photo of one of my cats, Pippin. Yes, he is named after the character from the Lord of the Rings trilogy. Unfortunately, Pippin had to be put to sleep today after only four years of life. People that know me personally know that I have two other cats (Chet & Gimli) and some non-cat owners or non-pet people don't understand what it is like to lose a cat, especially if you have more than one. Well, it hurts. Bad. Especially if you (my wife and I) are the one's to make the choice to end their life. It was one of the most difficult choices I've even made in my 30 years on this planet and it will weigh heavily on my heart for years to come. In the end, however, I feel it was the correct choice to make considering he was suffering from kidney failure.

How Pippin came to live with my wife and I (and later our kids) is something I will never forget. Shortly after my wife and I got married (December 31, 2007), my lovely bride came down with baby-fever. Of course, I wanted no part of having kids since I had only been married for a couple of months. Well, unknown to me, my cousin Cheryl (my wife's best friend) who was living in Georgia at the time, stumbled upon a 4 week old kitten near a dumpster. My cousin is the consummate animal lover, having rescued numerous animals in the years prior, mainly while working at various animal hospitals. In typical fashion, she decided to save him from a probable death at the hand of a bobcat, car, or starvation. She informed my wife of the new edition and in the following days, made the drive to Northern Virginia where we live for a routine visit, kitten in hand. My wife fell in love with it immediately, finding it to be a suitable baby replacement. Not being able to say no to my wife, I reluctantly agreed to let him stay in our apartment with our two other cats. I have a problem with stuff like that...

Things with him went as good as they can with such a tiny kitten. We went through the normal growing pains with a kitten. During litter box training, he peed on my bed. I of course was livid, and after stewing about it at work all day, I came home and demanded he be taken back to Georgia by my cousin. My wife, hysterical, scooped him up and went in to the other bedroom. She clutched him, tears rolling down her checks, and just held him up to her chest. Needless to say, I recanted. He became a full fledged member of my family. In the years to come, he became known as the "friendly one" out of my cats. He loved to be near people... kids, adults, complete strangers. He was very loving to my wife and I and surprisingly, tolerated my older daughter for the last three years, despite all the tail pulling and fur grabbing that is associated with infants and toddlers. He was often found sleeping on our bed, more than likely under the comforter curled up in a little ball. He would even snuggle in the crib with our first daughter, stretched out along side her.

I believe animals that are rescued understand what their person did for them and will be forever grateful. They repay that display of kindness with unquestioning love and loyalty to their people. Pippin was a prime example of that. Animal owners know in the bottom of their hearts that they will likely outlive their pets and I am forever thankful for having him in my life, even if it was not long enough.

The Rhino is now complete! Please enjoy these photos. 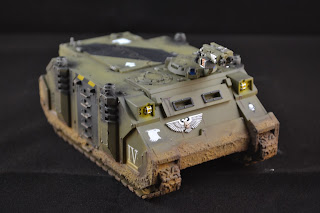