Given their smaller size, I decided against using the Tamiya aerosol cans I used in the SSD build and instead went with standard Tamiya paint. Luckily for me, I chose relatively easily matched sprays when painting the SSD; Gunship Grey (TS-48) and Haze Grey (TS-32). 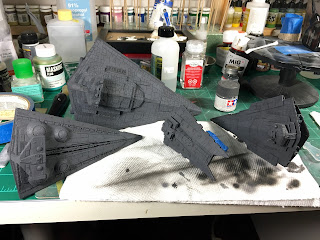 Tamiya Dark Grey (XF-24) is a pretty close match to the Gunship Grey so I decided to use that as the color for the dark panels on the ships. I applied it over a black primer coat on the models, leaving some of the black showing through in recesses for shading. 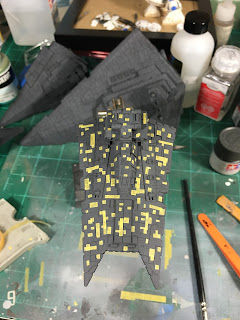 After the Dark Grey dried, I spent a fair amount of time applying tiny pieces of Tamiya masking tape randomly across the surface to give the ship an Aztecing effect. Of course, this isn't true Aztecing, which is a repeatable pattern, but the effect is similar; making the surface appear to be made of of lots of individual panels. 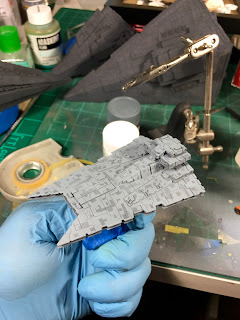 After the grueling task of applying the tape was done, I gave the model a coat of haze grey made by mixing Tamiya RAF Ocean Gray 2 (XF-82) and Mr Color Flat White (62) mixed at a 1:1 ratio. I removed the tape and then gave the model another couple of coats with the haze grey heavily thinned to tone down the dark panels and make everything blend in a little better.

After I do this on the other ships, I'll move on to painting some of the raised details in a lighter grey and applying various washes to bring out some depth in the model.
Posted by TJ Haller at 1:32 AM 2 comments: 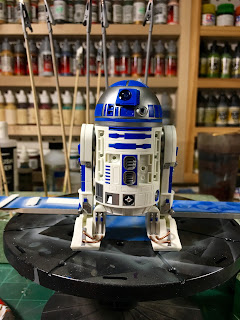 The same client that commissioned Luke's X-wing and Poe's X-wing has also commissioned me to build R2-D2, BB-8, and an A-wing. I was particularly excited for this because I absolutely adore Bandai's 1/12 scale droid kits! Considering I was fresh off my build of R2-KT for my personal collection, I started with the lovable Artoo. I decided to go with a complete paintjob on this model, as opposed to KT, where I left the white parts unpainted. For the blue bits, I used Mr Color Blue (5) lightened with a little Flat White (62). The white was done with my custom mix "X-wing white" that I have laying around from all of those X-wings I've done. The dome and other metallic bits were done with Alclad Aluminum and the cables on the feet were painted with Alclad Copper.
After I painted and assembled the droid, I went to work on painting all of the included gadgets. There were done primarily with various Alclad and Vallejo Model Air metallics and then given enamel washes. 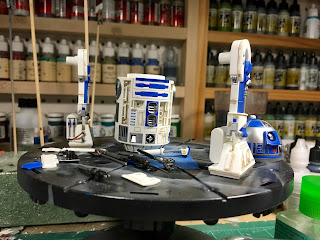 With the handful of small decals applied to the dome and the lights painted, I moved on to the first pass of weathering using Mig Productions Neutral wash. This was used for the panel lines and crevices and more earth toned enamels will be added for further weathering.