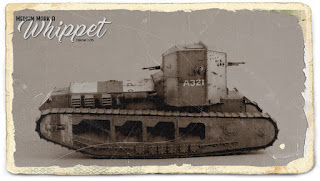 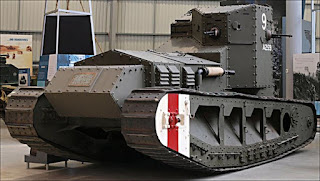 Picking up where we left off on the last post, I move on to more identification painting and then weathering on the Whippet. 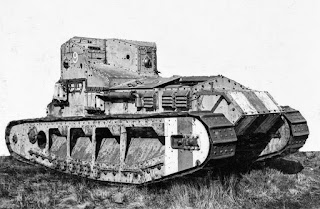 With most of the construction covered in the last post, I'll now move on to the finishing details of the build and the beginning of the painting.
Read more »
Posted by TJ Haller at 7:36 AM No comments: 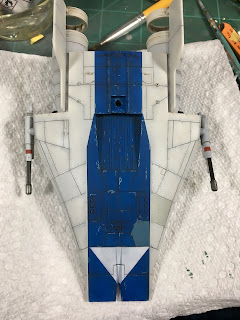 With the enamel wash with some matte varnish, I can begin the next stage of weathering. First up is some chipping using Vallejo Model Air Blue RLM65 (71.008), which I am doing by hand with a paintbrush instead of a sponge. Using a brush allows me to make finer chips and gives me more control over placement. The downside is that it is far more time consuming, however, I feel the end result is definitely worth it.
Posted by TJ Haller at 11:14 PM No comments: 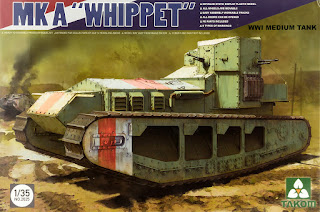 Even though I am primarily a science fiction modeler, I have a serious soft spot for World War I armor. That's where this kit comes it. In the last few years, a couple of model companies have been putting out some wonderful First World War kits and I've had my eye on a few of them. On a whim, I decided to pick on this fantastic offering from Takom. The Medium Mk.A "Whippet" was Britain's first medium tank, intended to compliment the slower heavy tanks. With a crew of three and armed with four .303 Hotchkiss Mark I machine guns, this tank had a top speed of a blistering 8 mph, making nearly three times as fast as its heavy tank cousins. First entering service in 1918, they proved effective at covering the fighting withdraw of British infantry division during Germany's Spring Offensive in the tail-end of the war. After the war, they continued to serve the British Army until 1930, seeing action in Ireland during the Irish War of Independence (1919-1921) and as part of the British Expedition in support of the Whites during the Russian Civil War. 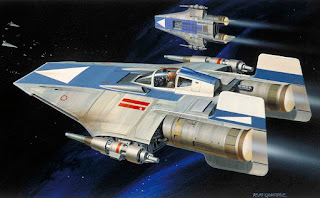 To go with my recent R2-D2 and BB-8, my client also asked for a 1/72 scale A-wing. After talking over the paint job, we decided to go with the blue and white color scheme seen on the original Ralph McQuarrie concept art. 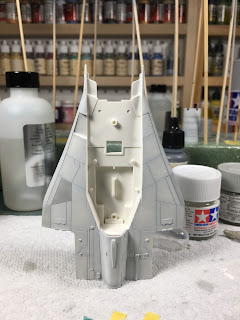 The base color is a custom mix of Tamiya Flat White (XF-2), Neutral Grey (XF-53), and Deck Tan (XF-55) over a German Grey (XF-63) preshade. I was hesitant to use the panel line preshade technique because it isn't the most realistic, but since this is an imaginary ship I decided to go ahead and do it. After the base color was down, I went around and picked some panels out and sprayed them with various Tamiya and Mr Color grays, similar to the studio model. 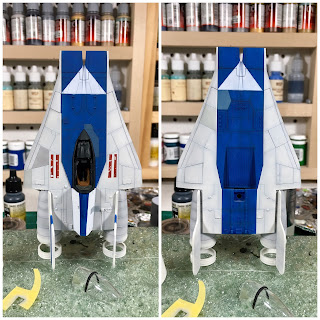 The blue areas were primed with white, preshaded with NATO Black (XF-69) and then given a coat of Flat Blue (XF-8) and Flat White (XF-2) mixed 6:1. I painted a few panels with some different blues for a little variation. All of the pure white areas (the triangle, the tops of the vertical stabilizers, and the rear of the cockpit) were painted with Flat White (XF-2) and the red stripes were painted with a mix of Flat Red (XF-7) and Hull Red (XF-9). 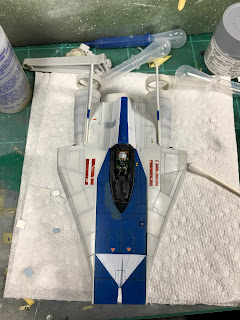 After a coat of Alclad Gloss Klear Kote, I added all of the kit-supplied decals. These little decals are pretty nice and add a little bit of detail to the model. Bandai decals are a little on the thick side but respond well to MicroSol and MicroSet. 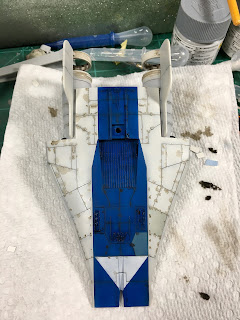 The decals were sealed in with another coat of Gloss Klear Kote and some washes were added to add some depth to the panel lines. I used MIG Neutral Wash for the white/grey areas and MIG Dark Wash for the the blue areas. This also brought out the fantastic rivet detail that is present on all of the panels; the end effect is really quite nice.

After the wash dries, everything will be sealed in with a matte varnish and I'll move on to more weathering!