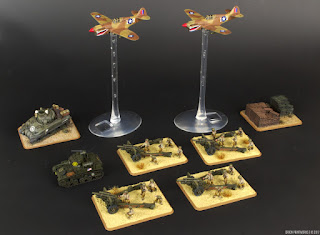 This is what I have complete for my Flames of War mid war American force. This has been a labor of love for me and I'm quite proud of how much I've managed to get done. I still have more to do, such as a battery of six M7 Priests, another armored infantry platoon, and some more M3 Lees.

I used a variety of paints for the olive drab throughout this project. Most of it was done using Tamiya Olive Drab (XF-62) and then highlighted with a mix of XF-62 and XF-60 Dark Yellow. I also used Mr Paint Olive Drab FS34087 (MRP-234) for the Lees and Vallejo Model Color Brown Violet (70.887) for the Shermans. I like the mix of colors since it gives a little variation to the army.
Posted by TJ Haller at 10:44 AM No comments:

I've been rather busy lately, both on and off the painting table. In addition to my nearly complete British 7th Armoured Division army, I've been working on a mid war American army since the new Fighting First sourcebook was released in October. Since I have no self control, I also have a nearly complete British late war army waiting to be assembled and painted. This army will also be based on the 7th Armoured Division and their exploits in Europe along the Western Front, with a smattering of Churchill tanks of the 31st Tank Brigade.

In the meantime, here's an image dump of all of the American goodies I've been working on the past month or two for Flames of War:

Gimli; or mourning the loss of a friend

On Monday, November 27th, my beloved tuxedo cat Gimli was put to sleep at the age of 11. Gimli, or Gimmers as he was called by our family, was litter-mates with our cat Chet, whom we lost in January of 2015. Gimli was diagnosed with thyroid issues a year or so ago and had been on medicine since then, but within the last few months, the medicine seemed to have stopped working and he began to essentially deteriorate before our eyes. I decided, with the support of my wife, that there wasn't much we could do to extend his life comfortably and that the best decision would be to end his suffering. It was hard decision to make, more so than when we decided to have our other cats Chet and Pippin put to sleep (both of them were irreversibly ill and on the verge of death). Gimli, despite his diarrhea and unrelenting hunger, was still very much himself, though he was starting to fade. I made the call to veterinarian on Friday, November 24th and set the appointment for the following Monday.
As I wrote in my post following the loss of Chet, both he and Gimli were brought into our home in 2006 shortly after my now-wife and I started dating. While we initially were only looking for one grey kitten, the lady that we bought them from gave us priority over another interested person if we took the grey kitten and his tuxedo cat brother. We decided that Chet would be "hers" and Gimli would be "mine." While I very much loved Chet and he loved me, Gimli was always just a little bit more special since he was "mine." He was the runt of the litter, and as a full grown male cat, he was half the size of his brother and the size of a female cat!
Truth be told, it's actually rather difficult for me to put into words how much this cat meant to me. He was the first animal that was truly mine; he wasn't just the "family pet." He was easily the sweetest cat I've ever known. He never scratched or bit anyone and always was friendly to strangers to his house. When my friend would come over to play X-Wing Miniatures or any other games, Gimli would make it a point to sit on top of his game bag! He would also snuggle with any visitor to our house if they sat on the couch, either in their lap or up against them. Of course, he generally slept on my bed with me at night and especially during the day when I was on night shift, either between my legs or stretched out along my side. He also loved to wake me up on the weekends when he was hungry! He would extend his front claws and gently touch my nose or cheek, just enough to wake me up and hopefully convince me to go downstairs and fill his food bowl.
Losing him hurt. A lot. I cried after I made the appointment and then every day before we took him to the vet. Our young girls both made the decision to be with him for his journey over the Rainbow Bridge and while very sad, they both handled it well. I think the knew less of what to make of me than what to make of what was happening with Gimli. I make no effort to hide emotion from my children, but I don't often cry. Needless to say, I broke down in a bad way and neither of them has ever seen me like that, but I'm okay that they did. My wife and I have expressed to them that there is nothing wrong with displays of emotion from anyone because it's a natural part of life.

Later that evening while watching our favorite show, Jeopardy!, my six-year old daughter leaned over to me and said, "Dad, I wish Gimli never got sick and I really wish he hadn't died. I miss him." I replied, "Sweetie, me too. I miss him so much that I can't even really explain it, but he's in Kitty Heaven and I'm sure he knows how much we miss him."