My friend and I started playing the Tanks! skirmish game not too long ago. It's a fun, loose, and fast game involving tank-on-tank combat that plays very similar to the X-Wing Miniatures game by Fantasy Flight Games. We've been enjoying playing the game and painting the miniatures, but we were both longing for something with a little more strategic depth, so we made the decision to jump into Flames of War.

For the uninitiated, Flames of War is a World War II miniature wargame in 15mm scale produced by Battlefront Miniatures of New Zealand. The game is broken down into three periods of the Second World War: Early War (1939-1941), Mid War (1942-1943), and Late War (1944-1945) the first edition of the game was released 2002 with the most recent version, the 4th Edition, was released in March of this year. With that new edition came a renewed focus on the North African Campaign and the first two army books released feature the British 7th Armoured Division (Desert Rats) and the Deutsches Afrikakorps (DAK). I picked up the British book and my friend picked up the German book and we quickly set to collecting the models needed. 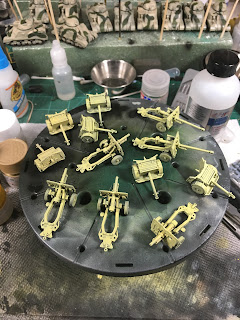 In support of my Desert Rats, I have some artillery and anti-tank guns. I have four QF 25-pounders and two QF 17/25-pounders (the long barreled ones). These are painted in a Tamiya approximation of BS 61 Light Stone, a color used in the North African Campaign from 1940 until 1943. These models need a wash and weathering before being mounted to their bases. I have more guns to add, notably the 6-pounder anti-tank guns that will be fielded with my motor platoon. 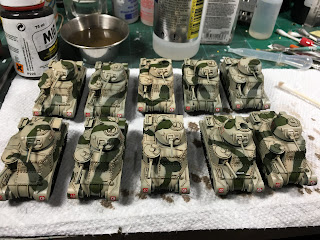 The British made extensive use of American-made M3 Lee/Grant tanks in North Africa. Despite their ungainly appearance, the 75 mm Gun M2 mounted in an archaic hull sponson was a welcomed upgrade in firepower for Commonwealth forces, supplying them with both potent anti-tank fire and much-need high explosive shells to better engage infantry and soft targets, and one that the Germans were not prepared for. The Grant-pattern turret also housed a 37 mm Gun M5 as a secondary weapon. These models are painted in a simple disruptive camouflage scheme using olive green and an Tamiya approximation of desert pink. 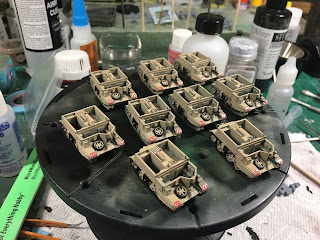 Giving my Desert Rats much-appreciated recce is number of neat little Universal Carriers. Often called Bren Gun Carriers, these small tracked vehicles served in a number of roles in Commonwealth forces throughout the war (hence the name). These are painted with an overall coat of desert pink and will given a wash in some weathering. 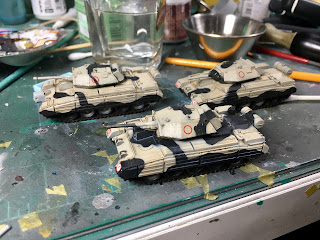 Rounding out my forces is a troop of Crusader tanks. These tanks served as the backbone of the Commonwealth armored forces in the North African Campaign. Powered by a Nuffield Liberty engine, these lightly armed and armored tanks were remarkably fast for their time, something their German rivals envied. This troop is a mix of the Crusader IIIs armed with 6-pounder guns and Crusader IIs armed with 2-pounder guns. I have bunch of these left to paint as well since they will serve as the basis of my Desert Rats force.
Posted by TJ Haller at 9:25 PM