Scale modeling has a problem and that problem is Nazis. No, not these doofs, but the ones our grandfathers (or in some cases, great-grandfathers) fought in deserts of North Africa, the mountains of Italy, and on the shores of France. Now, I am by no means the first person to have taken note of this and I'm sure I won't be the last, but it's really been wearing on me lately and to be honest, it all came to head last week with this: 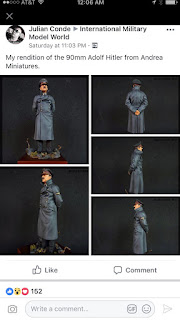 Pardon my language, but what in the actual fuck? I was bothered on a few different levels about this. For one, the piece is titled "Ein Führer" and the engraved brass plaque is adorned with swastikas. Second, the piece was heaped with praise and "heart" reacts with not a single comment challenging the reason behind the subject matter (in fact, one person open professed "love" for Hitler). Similar subjects like this are common on forums and Facebook groups; not a day goes by without someone posting an heroic-looking large scale figure or bust of an SS commander, Fallschirmjäger, or grenadier of some sort, not to mention the endless supply of Tiger, Panther, and other tanks along with a healthy does of Luftwaffe fighters. To me, the figures and busts move beyond the normal rationalizations that modelers have for building Nazi German stuff, like "it looks cool" (immature and up to personal taste) and "they had the best stuff of the war" (just not true), and into idolization. Any attempt to call people out on this shit is usually countered by some variation of the "clean Wehrmacht" myth that the Wehraboos love to spew across the internet (also popular: the Rommel myth). Does this mean that anyone who paints a bust or large scale figure is a Wehraboo? No, probably not, unless a disproportionate amount of their work is dedicated to the subject (or you know, they paint... Adolf Hitler). Even still, I feel that tanks and airplanes can be viewed in a largely sanitized way considering they're inanimate objects. Figures and busts veer into an uncomfortable area to me; they're much too personal, often because they tend to portray their subject in an heroic light. I'm sorry, but there is nothing heroic about an SS officer.

Where does this leave us? Well, let me plainly state that I have no real problem with modeling Nazi German equipment. I've personally done a 1/100 scale Tiger I and I thoroughly enjoyed it and it's currently in my display cabinet (I would also like to point out that it is not based on a known tank from a real life unit). I think the occasional armor or plane model is perfectly fine, but I also think it's important to remember what these machines are: instruments of war, often built by slave labor, and used in service of a perverted government that waged a war of extermination against its enemies, both real and imagined.
Posted by TJ Haller at 4:08 AM No comments: