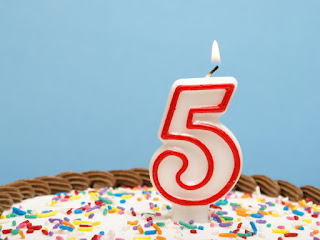 It recently came to my attention that my blog celebrated its five year anniversary in early May. I'm not really sure why I even started this blog other than I had seen other miniature wargaming-focused blogs and thought it would be best to emulate them. Plus, I really enjoy writing. In my younger years, I wrote a lot. I focused on English and literature in high school and loved creative writing. I wrote short stories and one-act plays and even kept a journal for a while. Combining my old hobby with my new hobby seemed like a no brainer. In reality, I probably had no business starting something like this back then; my painting was nowhere near the level of quality that warranted having a blog dedicated to it. Yet, for some reason I trudged on, occasionally writing or posting a picture for the remainder of 2012.

I lost interest towards the end of that year in both this blog and the hobby in general. It mainly had to do with the amount of stress from my job, which I quit in May 2013 to start the job I currently have. I slowly started painting again and by early 2014, I was writing again. 2014 was also the year I decided to start taking commissions and when I broke into legit scale modeling after learning about the Fine Molds Star Wars kits. For most of 2014 and 2015, I was pretty focused on the hobby and the blog. I wrote 99 posts in those two years, which was the most I've put out in that span of time. I slowed down a little in 2016 (seriously, what a shitty year that was) but I have picked up the pace again this year and have almost matched my writing output of the previous year by July.

Now where does this lead? That's a good question and one that I think is worth asking. Make no mistake about it: even with my 600+ followers on Facebook, I'm a nobody in the scale modeling community. I pretty okay with that, especially given the vitriol that can stem from something as silly as this hobby. The amount of trolling and outright asshole behavior that goes on in some of these Facebook groups and forums is ridiculous considering this hobby is essentially playing with plastic toys. I don't think I have a particularly unique viewpoint, but I'd like to start writing about more than just what I'm doing and how. There are some subjects that I feel are worth talking a bit more about and there are a whole host of modeling-related topics that should be talked about more than they are. (Seriously, what is up with the obsession over Nazi German stuff?)

Regardless, I'm looking forward to what the next five years has in story for the hobby and my blog. I hope that both my writing and my modeling grows and matures in the years to come like it has over that last half decade. As always, thanks for your time and support!
Posted by TJ Haller at 3:04 AM