Based on feedback I've gotten on other models I've completed, I decided to go full bore and weather this tank the way it should be. I have tried it before on a Rhino I completed for a local painting contest a year and half ago (I had only been painting for 6 months and it was my first completed vehicle... I also won for best vehicle!). The last time, I was pretty conservative on the application of the weathering, but since then I have gained a little more confidence and expertise so I will attempt a more through effect. I did a test piece this morning to see how it would turn out and took a quick snap with my phone (it turned out slightly blurry, my apologies). This is the shroud for the twin-linked assault cannon: 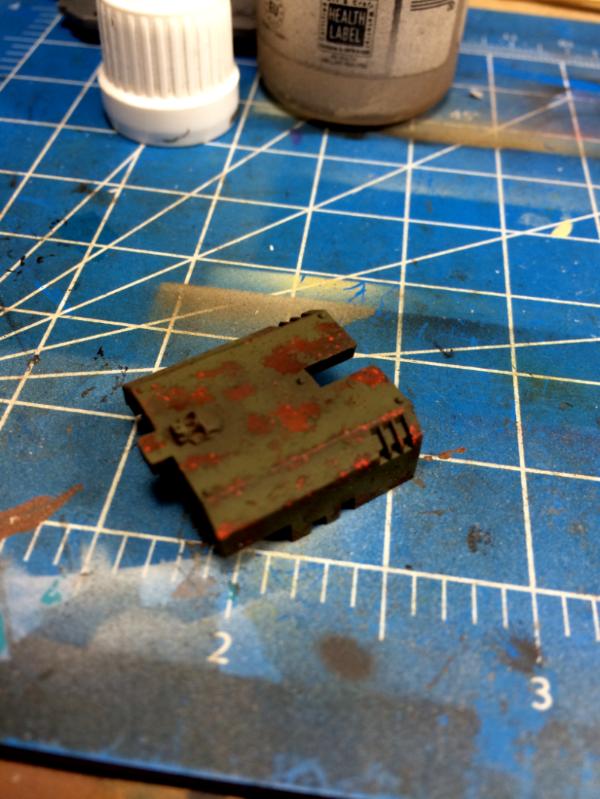 It was primed with Vallejo Surface Primer Grey then given an base coat of VMA Hull Red with an airbrush. I then added spots of VMA Rust and VMA Italian Red, also with an airbrush. I sponged on some GW Blazing Orange and VMA Camo Black Brown. To bring shift colors closer to an oxide rust and to kill the intensity of the orange chips, I used Vallejo Model Wash Rust sprayed through the airbrush as a filter. After everything was dried, I sealed the paint with a couple of coats of Liquitex Matte Varnish. When the varnish was dried, I applied three coats of Heavy Chipping Fluid from AK Interactive. If works similar the tried-and-true "hairspray technique" that AFV modelers have been using for years, with the benefit of not smelling like hairspray. After the chipping fluid was dry, I proceeded to work on the green using my normal method for Raptors, which is RMS Olive Shadow, RMS Olive Drab, and RMS Worn Olive for the shadow, base color, and highlight respectively. When that was completed, I got down to the chipping. Using and old brush, clean water, and a modeling tool, I went to town on the weathering. Using the brush with clean water, you lightly humidify the top coat of paint so that the water seeps down to the chipping fluid. After a couple seconds, you can use the brush (or a toothpick or modeling tool) to scrape away the top layers of paint, exposing the "rust" layer below. After everything was dry, I sealed the entire piece with a couple of coats of matte varnish.
Posted by TJ Haller at 3:29 AM