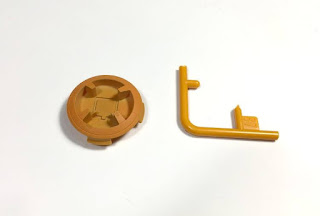 After a little trial and error, I found a paint mix that I think looks pretty good. It's a little darker than the kit plastic, but after looking over some reference photos of the puppet used in the movie I think it works really well. It's made with Vallejo Model Air Orange (71083), VMA White (71001) and VMA Yellow mixed 4:4:1 with just a touch of VMA Hull Red (71039) added to it. I might go back and add some shading with some brown but I haven't made up my mind on that yet. 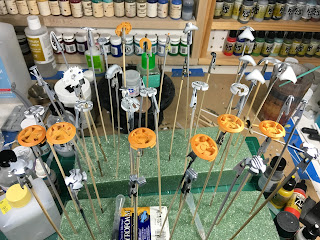 It's hard to tell from this picture, but all of the white parts have been given a light preshade with some excessively thinned Tamiya German Grey (XF-63). I was on the fence on whether or not to do this, but I decided to should help give the model a little more depth and serve a nice starting point for the weathering since it seems to be predominately located on the edges of his various panels. A little more visible in the picture are the metallic pieces, which look absolutely incredible with the Alclad II Aluminum paint on them. I couldn't be more pleased with how they turned out! 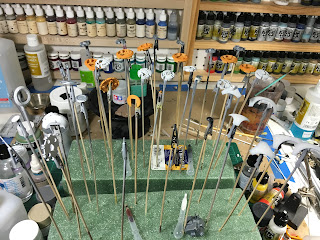 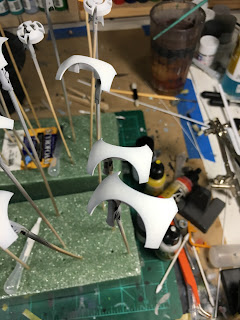 I mixed up a warm off-white to serve as the base color for BB-8. I mixed Tamiya Flat White (XF-2) and Buff (XF-57) at a 12:1 ratio and added a tiny brush-load of Neutral Grey (XF-53) to the color cup of my airbrush. All of the white pieces were given a couple of light coats and I made sure to allow the preshade to show through ever so slightly. In the first picture, you can also see his two "eyes" (or photoreceptors as they are called). The kit comes with decals to cover the outside of the large "eye," but it's nearly black, which is not correct to the filming puppet. I masked off the lenses and sprayed the surrounding area with Tamiya German Grey (XF-63). I'll give them a slight drybrush with Tamiya Gunmetal (X-10) to give them a worn look before I put them on the model.

With all the parts painted the next thing to do is give everything a coat of Future before starting the weathering!
Posted by TJ Haller at 5:17 AM