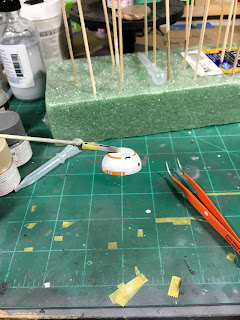 Not very much progress was made today, outside of giving everything except for the metallic parts a coat of Future in preparation for an oil gunk wash. I assembled the head, leaving off the metallic parts because they don't need to be coated with Future (it detracts from the finish). It fit pretty nice and looks good, but there is a seam on his right side that doesn't match a panel line like the seam on his left. I don't really want to fill it now that the parts are painted, but it's going to bother me if I don't so I'll probably end up doing it. It's a pretty small seam and it shouldn't be too hard to make it look nice.

So far that kit has been quite a fun build and it has helped get the modeling juices flowing again. Also, my two daughters are enjoying seeing this kit come together because they are both enamored by BB-8 and all of his cuteness!
Posted by TJ Haller at 10:38 PM