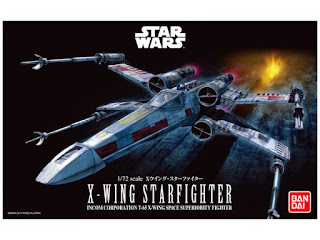 I was commissioned to build another Red 5 X-wing from a fellow in Toronto. I'm pretty much recreating my previous build of this model, but I'm making a few minor changes. I went with a few different colors on a couple of the panels and relied more on chipping fluid instead of masking fluid to weather the colored panels. I did a two-tone red for all of the red markings as well, just to add a little more depth. The canopy frame actually has three layers of chipping because the original color was lighter than what my client wanted so I used that as an opportunity to add some more weathering to it.

After all of the panels were painted, I lightly sanded the model to give the panels a little more wear and then gave the model a dusting of the off-white base color to tone down the panels further. After I gave the model a coat of Future and allowed it to dry overnight, I gave everything a gunk wash with 502 Abteilung Starship Filth. With that done, the model has to dry for about a week before sealing everything with a matte varnish.