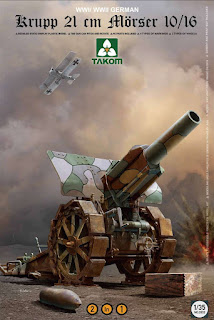 Fresh off the heels of my Whippet build, I decided to stick with the First World War theme and build this interesting little kit from Takom. The kit gives you two options for construction: the short-barreled 1910 model and it's replacement, the long-barreled 1916 model. I opted for the 1910 model because the painting guide shows a piece captured by Canadian soldiers of the 27th Battalion (City of Winnipeg) during the Battle of Vimy Ridge in April 1917. After the break, we'll dive into everything this kit has to offer. 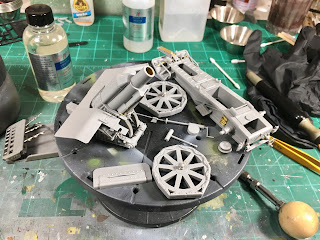 Overall, this kit goes together well with no major issues. The biggest problem is the photo etch rifling for the barrel; it's kind of a pain because it's too large and rolling photo etch can be troublesome, but after trimming a couple of ridges off it went it much better. The two pins under the barrel housing snapped while I was attempting to remove them from the sprue, so they were replaced with brass rod. The support rods for the gun shield didn't quite fit so I cut them off and will replace them with styrene rod after assembly (the gun shield was left off for ease of painting). I also added a few extra bolts taken from the spares provided in the Whippet kit. 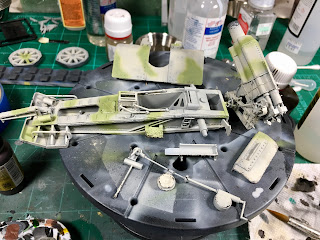 I used Alclad grey primer and then preshaded with Tamiya German Grey (XF-63). The main color is Ammo of MIG Yellow Grey and the green is Pale Green mixed with Yellow Grey. A different green is listed in the color call-out, but the Pale Green is closer to the pictures provided. All of the chipping was done with Yellow Grey (over the green areas) and a mix of some Vallejo dark browns and black over everything else. The track pads were also painted with XF-63 separately from the wheels. 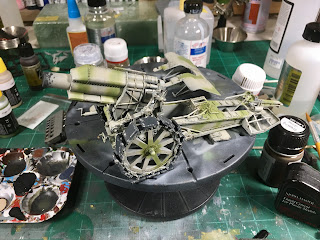 After a brown filter was applied over the entire model to tone everything down and bring the colors together, the rivets and details were given a wash with Dark Green Grey panel line wash from Ammo of MIG's aircraft line and some streaking was applied with MIG Streaking Grime. After gluing the track pads to the wheels, I sponged on some Yellow Grey to simulate worn off paint. With a majority of the weathering done, the model was given a coat of gloss varnish to seal in the enamels and prep the surface for the two decals representing graffiti applied by Canadian troops to claim their prize (these are applied after weathering to show fresh paint). After those go on, some more weathering with oils to simulate dirt and mud build up will be added to the lower portions of the kit.
Posted by TJ Haller at 1:48 PM