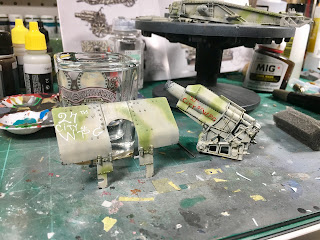 Following a coat of Alclad gloss, I applied the awesome graffiti decals on the gun shield and barrel. The decals are extremely matte but seemed to go down better than the ones on the Whippet. I had to cut the "WPG" part of red lettering on the barrel off and apply it separately to make it fit properly. There is also a little curled piece on that part of the decal that I think is from my cutting it; I've tried to force it down with some MicroSol but haven't been successful. I'll most likely attempt to slice it off with a sharp scalpel blade. The carrier film is pretty obvious, but after they dry I'll seal them in with some gloss varnish followed by some matte varnish to hopefully make the carrier film disappear. 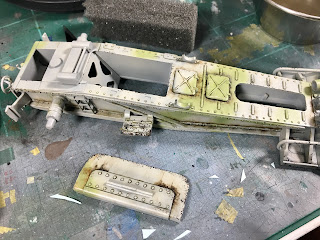 While the decals dries, I set to work adding some dirt and grime with 502 Abteilung oil paints. I used a couple of different browns to vary the finish, adding anywhere that gunk and dirt would likely buildup. I don't usually do this with oils as I much prefer using enamels, but I thought it would be a good way to practice a skill that I feel needs improvement.
Posted by TJ Haller at 3:43 PM