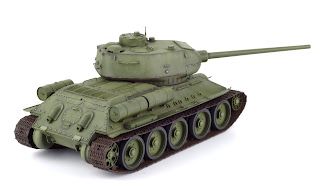 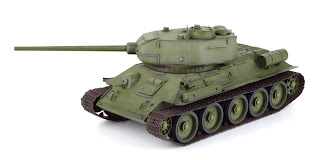 My initial attempt at two-tone camouflage was an unmitigated disaster, but instead of stripping the whole thing down, I just re-primed everything with black (except for the tracks and road wheels). From there, I went back with MRP 4BO Green as a basecoat, painted grime/shadows with a mix of Tamiya Flat Brown and Flat Black, and then worked in highlights by mixing ever-increasing amounts of AK Real Color 4BO (which is much too desaturated and nowhere close to the real thing) into some MRP 4BO. After that, I highlighted some details with Lifecolor Faded Olive Drab and a fine paintbrush.

Up next is the turret markings, which I'm probably going to attempt to hand paint instead of using the kit decals.