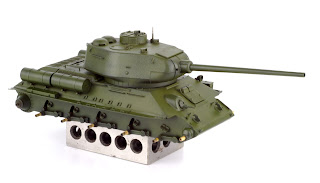 What a goddam roller coaster I’ve been on with this model over the last couple days.

I finally got around to priming the model, but for some dumb reason I decided to use an AK spray primer I had laying around because I was too lazy to turn my airbrush compressor on. Unfortunately, it appeared to have crazed the plastic, especially on the turret roof. Why I was debating on whether or not to strip it, I spilled a huge blob of MRP 4BO on the turret due to sheer clumsiness. That pretty much sealed the deal as far as stripping it goes, so off into SuperClean it went!

This afternoon, I pulled it out and scrubbed the paint off as best I could before sanding the shit out of the roof and then giving it a couple coats of Mr Surfacer 500. It’s not perfect by a damn stretch, but it’ll do because I want to move on with the build. I finished up by giving everything a healthy coat of MRP 4BO Green, probably the best out-of-the-bottle 4BO available.

In poking around the internet, I found an interesting camouflage scheme on a T-34/85 that features a base of 4BO with a pale greenish disruptive color over it. My friend and co-host Scott had the idea of using AK Real Colors “4BO” to serve as that color and my initial test shows that it seems to fit the bill quite nicely!