After completing all of the "black" for the body of the ship, it was time to move on to the distinct orange and grey markings. Even though the pattern of the markings is fairly simple, it still ended up being a rather complex masking job! 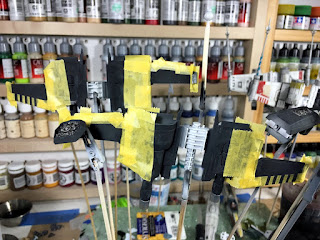 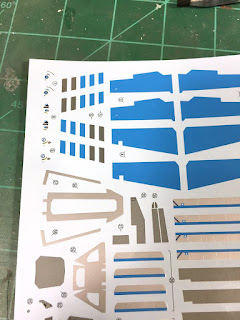 A lot of the pattern follows panel lines, which is always welcome because it tends to make the job a little easier, especially with how crisp the panel lines are on these Bandai models. As to be expected, the hash marks on the rear wings were the most difficult task. In my first attempt, I placed 2mm wide strips of tape on the wing and tried to cut along the panel line. Needless to say, it wasn't exactly easy. Feeling frustrated, I came up with the idea of using the decal sheet as a template. I placed the strips of tape between the decal markings and used a straight edge to cut the tape at the appropriate angle. This ended up working much better!

After the masking was complete, I sponged some liquid mask on and gave all of the soon-to-be orange panels a splotchy undercoat of Tamiya Flat White (XF-2) to make painting the orange easier and to give it a varied look. I mixed an orange using Vallejo Model Air Orange (71083), VMA White (71001) and VMA Yellow mixed 4:4:1 with just a touch of VMA Hull Red (71039) added to it (this is the same orange I used on BB-8). After a couple layers of that were on and dried, I sponged large sections of the panels with liquid mask and applied a darker orange on top. The darker orange similar to the previous mix except with a little less white and a full drop of VMA Hull Red. I also painted the handful of grey panels using VMA US Grey (71047) and Light Grey (71050) mixed 2:1. 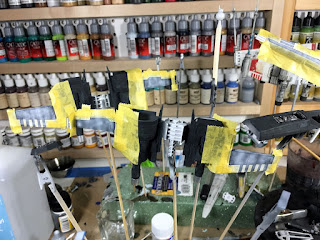 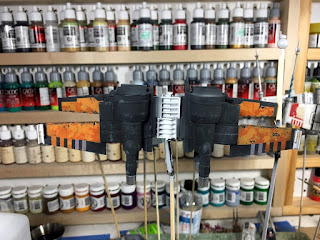 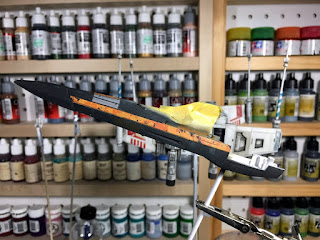 I removed the masking tape and wiped the liquid mask away with a gloved finger (I've found that it comes off the surface of the model better using a latex glove). I decided that the interior "engine bays" needed a little variation so I painstakingly masked them all off and gave them a coat of, quite fittingly, VMA Engine Gray (71048). They'll eventually get a wash and a drybrush of metallic pigment to give them a worn look. I also went around the fuselage and painted a couple of different panels in various shades of grey just to give the surface a little more variety.
With all of the panels complete, the model will get a coat of Future before giving it a black panel line wash and applying a few small decals.
Posted by TJ Haller at 5:38 PM