Because the model was so large and impossible to photograph with normal setup, I decided to make a short video tour of the model sitting on my kitchen table shortly before I delivered to my client. I think it was able to capture the scale of this beast quite well and the background music definitely helps!
Here she is with the rest of the fleet! I still have a few more pictures on my camera's memory stick that I need to import and process, but this picture was too cool not to share immediately. When I get a chance to upload some more pictures, I will update this post. In the meantime, follow me after the break for a quick build review with more WIP shots! 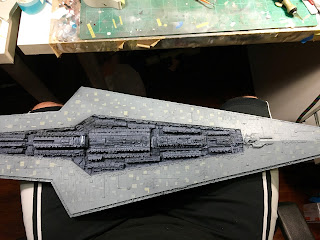 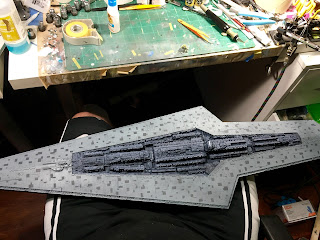 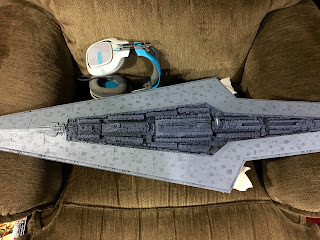 After priming the model with a near-black automotive primer, I painted the "city section" with Vallejo Luftwaffe Uniform (70816) and mixed in a little white for the highlights. I then masked the entire city section and gave the flat surfaces a coat of Tamiya IJN Gray (TS-67) followed by tons of tiny strips of masking tape. I then gave everything a coat of Tamiya Haze Grey (TS-32). Upon removing the masking tape, I found the paneling to be a little stark, something that would need to be fixed! To tone down the dark panels, I lightly misted more Haze Grey over them to get them to blend in a little more. 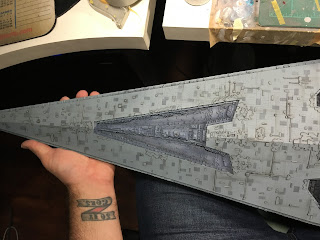 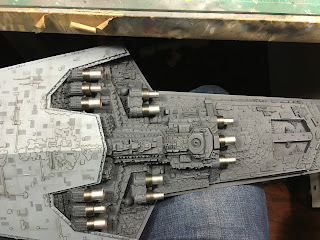 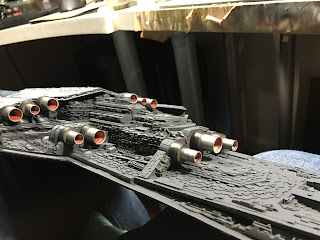 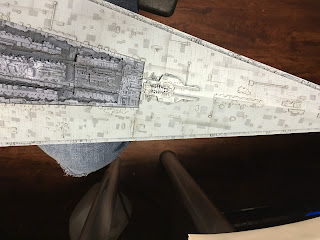 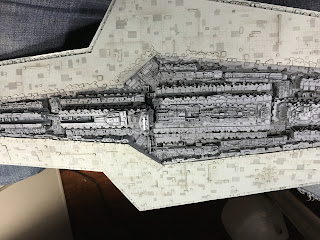 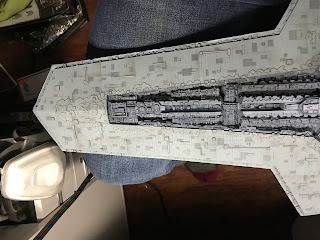 I then attached the engines and went to work adding so faux panels. This was achieved with an old school modeling technique: load up some very thin dark grey paint in you airbrush, place a piece of masking tape or Post-It note where you want a panel line, lightly spray the area, then pull up the tape. This creates an artificial panel line that will help add detail and depth to an otherwise flat surface. This effect can be see on the miniatures used in the Thunderbirds television show and on studio scale models used in moves such as Star Wars (in fact, it's used quite prominently on the 5' Millennium Falcon model). I also added washes to the the raised surface details on the hull using Mig Productions Dark Wash enamel. 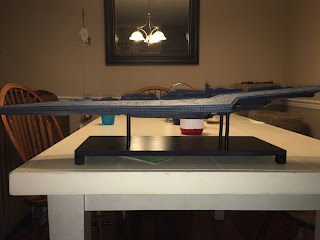 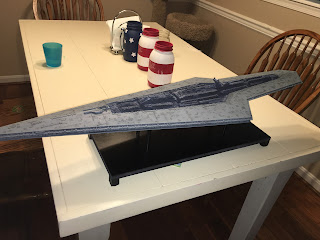 There was a lot of thought put into how to build the base. Since it was to be used for gaming, I need something that was easy to manipulate but sturdy enough to be moved. It also could not be permanent in order to reduce the chance that something would be broken during transport. I ended up cutting a piece of 1/2" MDF board into an 8"x20" rectangle and adding 3/4" wood cubes from Hobby Lobby to the bottom to serve as legs. After carefully examining the underside of the model for flat areas that would be conducive to supports, I settled on four posts to support the ship where it was the heaviest. I laid that pattern out on the MDF and drilled halfway through. I epoxied some wood dowels in the holes and capped them with adhesive felt pads to protect the paint on the model. The entire thing was sanded, primed, sanded again, and then given a coat of satin black paint. 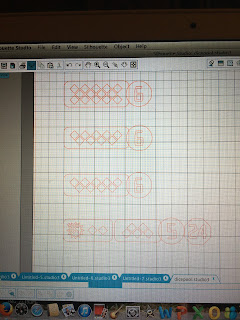 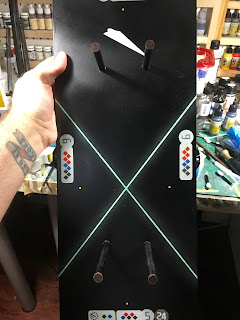 Using my Cameo Silhouette and a normal Star Wars Armada ship token, I created some stencils for the ship information on the base. The information included is the dice pool for determining attack rolls, firing arcs, line of sight markers, shield and hull values, and a ship silhouette just for good measure! I also epoxied some acrylic rotating counters on the bottom to serve as shield indicators.