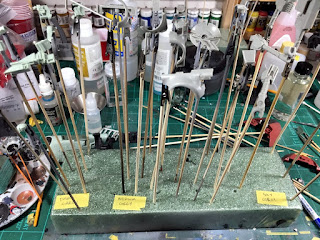 I've been longing to build a model of one of the coolest Star Wars ships of all time, Boba Fett's Slave I. Like all Bandai kits, this 1/144 scale version of his iconic ship comes premolded in various colors but unlike most Bandai Star Wars kits, this one has to be painted if you want to accurately represent the ship. Having the parts organized by color makes painting it pretty easy given how complex the rear of the ship is. I removed and cleaned all of the parts from the sprue and organized them by what color they were to be painted. 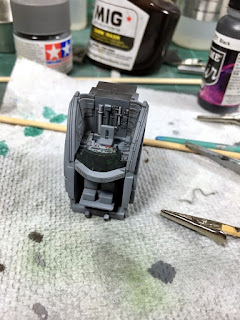 After I got all of the rear pieces organized, I started painting the cockpit. Most sources show that the cockpit should be army green but I much prefer grey, which was Tamiya Neutral Grey (XF-53) in this case. I highlighted a few bits with some Vallejo light grey and silver and gave everything a wash with MIG Dark Wash (enamel). The front console was painted with Tamiya Deep Green (XF-26), I applied some liquid mask with a sponge and then gave it a coat of NATO Black (XF-69). 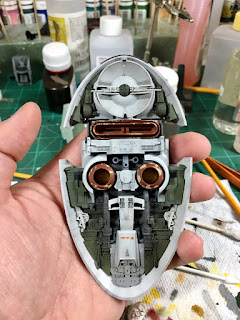 The bottom dark grey layer of the rear was painted with Tamiya German Grey (XF-63) and given a wash with MIG Dark Wash enamel. The engine nozzles were undercoated with Tamiya Buff (XF-57), had some liquid mask applied with a sponge, and then given a coat of coppery brown mixed with a few Vallejo reds and browns. I preshaded the green bits with Tamiya Flat Black (XF-1) and gave them a coat of Tamiya Field Green (XF-65) followed by a wash with MIG Dark Wash enamel as the first pass of weathering. The grey parts were preshaded with Tamiya German Grey (XF-63), painted with Mr Color 315 (Gray FS16440), and given a wash with MIG Neutral Wash enamel. I also applied a few of the small decals on the grey parts.

I love how layers of parts are stacked on top of each other to make a complex surface. There is even parts that can't really be seen unless you hold it just so; it really is quite impressive. After all of the pieces are in place, more weathering will be added to dirty everything up, mainly chipping on the raised areas, more enamel washes, and possibly some pigments. 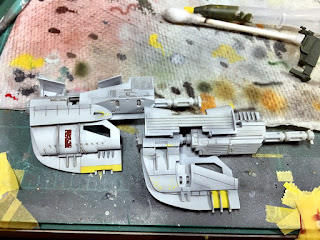 With all of the pieces done for the back of the ship, I will move on to the front skirt before finally tackling the main hull.
Posted by TJ Haller at 2:55 PM