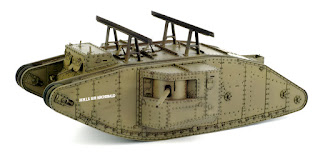 I know that the title says "Part I," but I must admit that is a little bit of a lie. The truth is that I've had this kit painted twice before. The original paint, which was water-based acrylic that I attempted and failed to chip, was painted over with a Tamiya mix, but I was again unhappy with it. I was on the verge of binning the entire kit, but decided to strip it and start again.

This time, I primed it a dark red-brown I made mixing  a couple different Stynylrez primers together, sprayed a couple of coats of AK Scratches Effects, and then gave it a coat of Tamiya Khaki XF-49 to serve as the base drab color and then lightly chipped. This color, of course, is an approximation (I firmly believe that the exact color was lost to history) and that's good enough for me. After a coat of X-22 Clear, I added the handful of decals, four in total, and then went to work on pin wash using Mig Wash for Desert Sand Base and yes, this was applied to every rivet... Every. Single. Rivet.

From here, I'm unsure of what direction to take the weathering. I'm leaning towards adding some post-shading with an airbrush and definitely a nice pass of pre-dusting to kick off the weathering, which will eventually be a dusty and dirty finish (this is one of the eight tanks that were sent to Palestine in December 1916). Regardless, I'm pleased just by getting to this point considering the struggles I've had with this kit. Part of my new outlook of scale modeling has been to "let go," trust the process, and know that the finish will turn out okay. If it doesn't, just chalk it up to learning and move on to the next one.

They don't all have to be barn-burners after all.

Email ThisBlogThis!Share to TwitterShare to FacebookShare to Pinterest
Labels: 1/35 scale, Mark I, Takom, Work in Progress, World War I