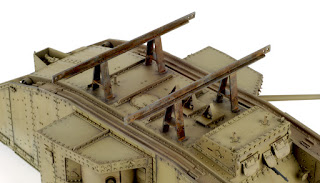 Since I'm still figuring out how to handle the dusty weathering on the lower hull, I decided to turn my attention to the sponson crane framework.

I had long ago decided that the framework would be left as bare steel in order to contrast with the painted hull armor. Thanks to my circle of modeling friends, I've been expanding my library of modeling books, and in the age of digital publications, this has been easier than ever. One of my recent additions was Adam's Armour 2 by Adam Wilder, which aside from showcasing some of Adam's best work, features a chapter on painting bare mild steel.

I started with a grey-brown painted with a mix of Vallejo paints and after carefully masking the the top of the hull—including over the photo etch exhaust deflectors—I gave the frames a couple of coats of Ammo Scratches Effects. I mixed together a blue-grey steel color using Tamiya acrylics, sprayed the frames, and proceeded to chip them to serve as the base steel. On top of that, various rust enamels were blended over the surface and then darker tones were speckled on top of those, blending any specks that appeared too large. After everything dried, I added a couple areas of orangey rust tones using oils and then rubbed the edges with metallic pigment.

Email ThisBlogThis!Share to TwitterShare to FacebookShare to Pinterest
Labels: 1/35 scale, Mark I, Takom, Work in Progress, World War I