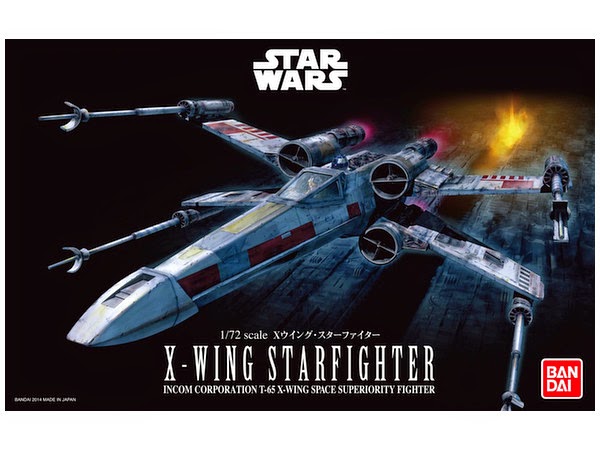 Along with the 1/12 Darth Vader I wrote about previously, Bandai has also released 1/72 scale offerings of the X-wing and TIE/x1 Advanced. Having built both the Fine Molds versions of these models, I was eager to get one built to compare it to the Fine Molds model.

Overall, it's a very nice kit with a couple of cool features and a few "interesting" design choices. The thing I really like is the droid socket behind the cockpit. Unlike the Fine Molds version, a fully assembled astromech droid slides into the socket, instead of just the dome. You remove the butt plate and slide the power generator trench back and out comes the droid. It also comes with two droid bodies so you can build both an R2 and R5 series droid. The detail is really crisp and quite impressive. Also, the S-foils lock together better than the Fine Molds version making it easier to display the craft in a landed position.

As mentioned by other people around the Web, the addition of the red panels is kind of pointless and adds unneeded complexity. The fuselage goes together sort of like a Lego kit with various small pieces plugged into various openings. The finished product looks fine, but I prefer Fine Molds method of keeping the fuselage in two main pieces to eliminate most seam lines. That being said, there are some gaps where a few of the pieces meet and I've had issues with the laser cannons staying on the wingtips, but this will be solved by gluing the kit (which I intend to do).


Lastly, I took a handful of comparison shots of the two X-wings next to each other: