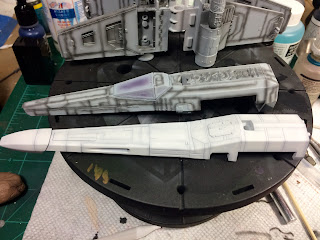 After the preshading was complete, I began laying down the base color. In the past, I have used a 1:1 mix of Tamiya Flat White (XF-2) and Medium Grey (XF-20), which I think makes a fine color for Rebellion ships. However, I wanted to try something different so I picked up a couple of Vallejo mixing bottles at my FLGS and set to work mixing up a custom color. I mixed one 10mL jar of Tamiya Flat White (XF-2), 2/3 of a jar of Tamiya White (X-2), twelve drops of Tamiya Flat Earth (XF-52), and four drops of Tamiya Neutral Grey (XF-53). The final result is a slightly warm off-white that I will probably warm further with an ocher filter. 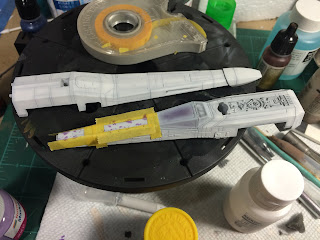 Although there is an extensive decal sheet provided with the kit, none of the decals have any of the typical weathering found on so many Star Wars vehicles. As nice as Bandai decals are, I prefer to use paint wherever possible for the most consistent finish. A combination of Tamiya masking tape and Humbrol Maskol applied with a torn foam, trying to mimic the weathering on the filming miniature as best I can. 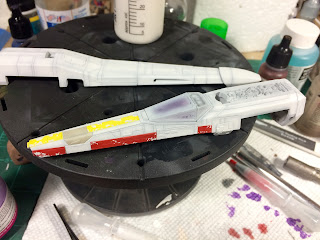 After an hour or so, I had handful of the panels painted. I used Tamiya Flat Yellow (XF-3) for the yellow areas, Medium Grey (XF-20) for the brownish panel, and a 10:1 mix of Flat Red (XF-7) and Hull Red (XF-9). In retrospect, the Medium Grey panel is a little too dark so I will repaint it with Buff (XF-57) to lighten it up. There are still a number of panels to paint and the cockpit frame before moving on to the bottom of the fuselage and the wings.