I had some free time and an X-wing in pieces so I decided to do a quick build of the most endearing Rebel pilot from Star Wars: Jek Porkins! 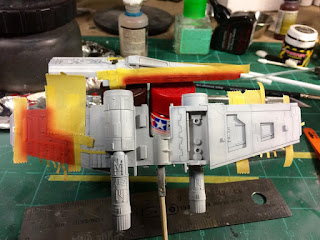 His color scheme has always been among my favorites and I think it's because it has similar colors to my favorite American football team, the Washington Redskins. Since this model was already disassembled, I went ahead and primed everything with some Tamiya Surface Primer from a rattle can. I preshaded everything with Tamiya German Grey (XF-63) and then gave the model a base coat using the same color I mixed for Luke's X-wing. 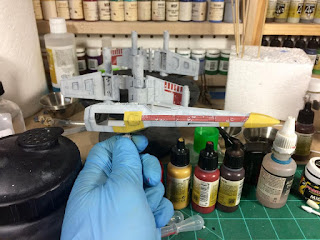 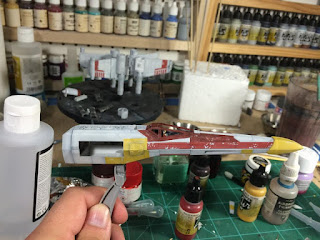 His paneling isn't as varied as Luke's, but it is still rather interesting and the dark red color is unique to his ship. The yellow is Vallejo Model Air Ochre (71.033) and the dark red is a 4:1 mix of Vallejo Model Air Hull Red (71.039) and Fire Red (71.084). I used AK Interactive Heavy Chipping Fluid for the scuff marks on those colors. The lighter red is a 10:1 mix of Tamiya Flat Red (XF-7) and Hull Red (XF-9). I used some masking fluid applied with a piece of torn foam for the chipping effects.
Posted by TJ Haller at 10:23 AM