After I applied two coats of an ochre filter and allowed the model to dry for a couple of days, I went ahead and assembled the model completely. I was initially going to hold off on this step and weather each section of the model individually, but after some test fitting with another one of these models I have in pieces, I decided to go forward with assembly. I also think that it will be easier to get a more consistent finish in the weathering since I can do the entire model at once. 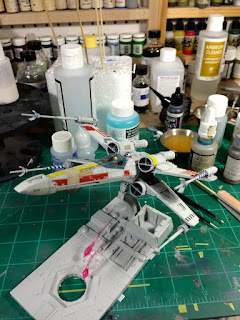 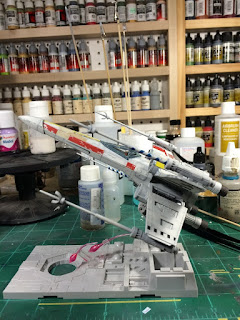 The next step is to give the model a couple of coats of Future before applying an oil panel line wash across the entire model and a gunk wash in some selected areas such as the engines and droid trench. After the oil dries for a couple of days, I will seal it with some matte varnish and begin applying pigments, using the studio model as a reference. I would also like to note that the ochre filter is much more noticeable in person than compared to these pictures I snapped with my iPhone camera.
Posted by TJ Haller at 7:19 AM