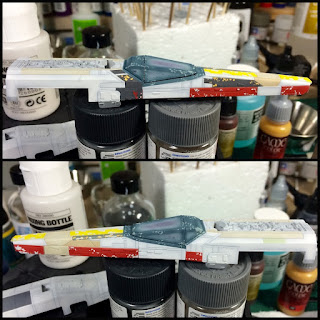 Paneling is complete on the top half! There is now eleven different colors on the top half of the fuselage, with the beige along the droid trench a different shade than the beige on the nose. I've also completed the few panels on bottom half of the fuselage, which can be seen in the lower picture. The color work is far less extensive on the bottom compared to the top, most likely because the bottom of the ship is rarely seen in the movie. 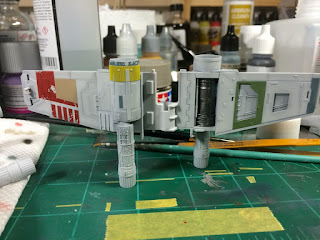 I moved on to painting the S-foils, which is the most complicated part of the painting due to the squadron markings. Again, the kit is supplied with high quality decals, but I much prefer the finish of paint an it's easier to weather compared to the decals. Luckily, this is not my first time trying to mask X-wing squadron markings so it went pretty well overall. The hardest part is getting the hash marks properly spaced, but after a little trial and error I think I got it. The decal sheet has a medium grey colored decal for the lower wing panel around the cutout. I decided to use Tamiya Cockpit Green (XF-71) instead because it appears to be greenish in the reference photos I have of the studio model. Above all, I just wanted a little splash of color on the wings. I also used this time to insert the engines that I had previously painted. They were done with a basecoat of Tamiya Gun Metal (X-10) over a black primer and then highlighted with a misting of Flat Aluminum (XF-16). They were then given a light drybrushing with some Tamiya metallic weathering powder. 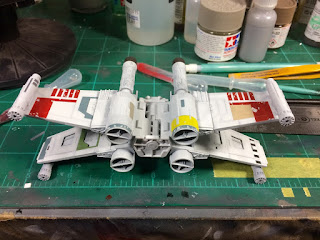 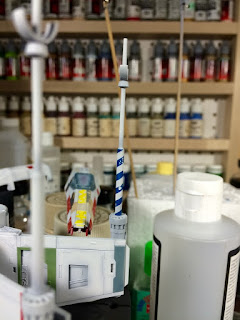 Now that all of the painting is complete, the next step will be to give the entire model a light rub with some high grit sandpaper to tone the boldness of the panels down, followed by an overall ocher filter to warm the entire model, and then begin work on the detailed weathering with oils and then pigments.
Posted by TJ Haller at 5:32 PM