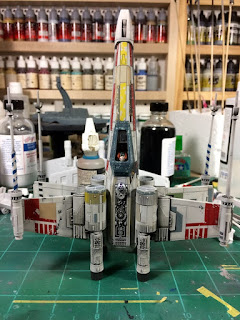 I added the grey/black chipping on the S-foils and some other spots on the hull. I had forgotten to do this but luckily I caught it before I got any further on the weathering. It's a small detail but it's pretty distinctive and helps complete the model. 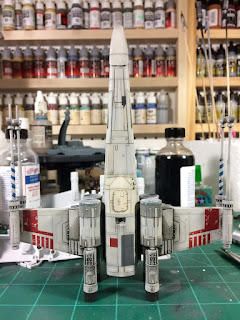 Working on some panel discoloration, primarily on the underside of the X-wing. I used some browns and greys to discolor a handful of panels using the studio model as a guide. The oil is very thin, almost a filter consistency, and will dry quickly. After it had dried, I'll protect it with a matte varnish and move on to some pigments.

This model is nearing completion and as soon as it's done, I'll begin working on the Death Star tiles for the the trench run. I have to buy a new workbench because my painting desk is nowhere larger enough to handle the volume of work that I will have making all of these tiles. Also, I have rather large model to work on, but what it is will be revealed shortly.
Posted by TJ Haller at 10:41 AM