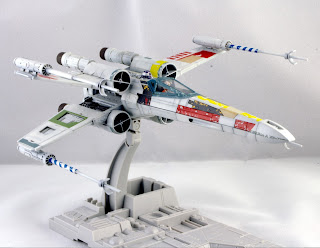 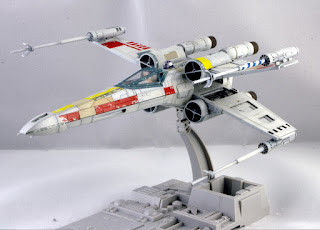 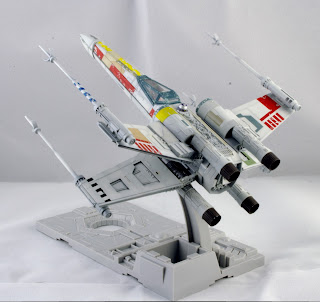 I had my camera out to take glamour shots of the TIEs for the Star Wars commission so I decided to take a couple of nice pictures of the Luke for a before and after shot when the weathering is complete. The model is extra shiny because it has two coats of Future on it in preparation of oil paints. Personally, I think the model is gorgeous as is, but it would be an X-wing if it wasn't weathered to the nines! 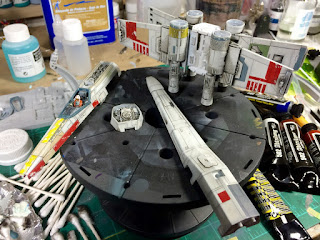 I managed to disassemble the model even though I had originally intended on doing all of the weathering on the completed model. Taking it apart was a lot easier than I thought it was going to be and I'm happy I did it; it was a lot easier to work on without getting in my own way. I was planning on doing a panel line wash over the entire model, but I made a command decision to instead give the entire model a gunk wash. A gunk wash is a tried and true weathering technique that move model makes have relied on for years and I first learned about it after watching Adam Savage build models on the Tested YouTube channel. The process is very simple: put your desired oil color on a palette, apply generous amounts of oil paint on the model without thinning it, then wipe it off with a rag. This ends up discoloring the entire surface of the model and allows oil paint to build up in panel lines and recesses. This can be done over a matte or gloss varnish; matte leaves more oil on the surface compared to gloss, which may or may not be desired.
Now the oil paint sit for a couple of days to dry completely before I begin to add more oils of various colors to give the model some tonal variations. After that oil has dried, the oil will be sealed with matte varnish and then I will apply pigments for the final stage of weathering.
Posted by TJ Haller at 11:16 AM